The Legend of Matheson 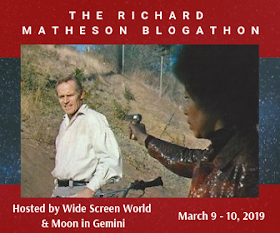 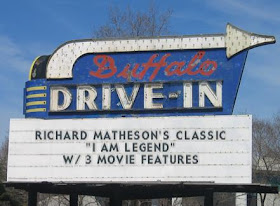 "The last man on Earth sat alone in a room.  There was a knock at the door..."  (The shortest horror story ever written).


This is the story of a man and his (arguably) masterpiece of speculative fiction.


Richard Matheson (1926-2013) was one of the most prolific authors of the 20th century.  He was a favorite of Rod Serling who used Matheson's stories or original teleplays for no less than 16 episodes of the classic TV series The Twilight Zone, beginning with  the 11th episode of the first season ("And the Sky Was Opened", based on Matheson's short story, Disappearing Act.)  An incomplete list of Matheson's output for TZ would also include what eventually became the fan favorites of "Nightmare at 20,000 Feet", "The Invaders". "Nick of Time", "Third from the Sun" and my personal favorite "Once Upon a Time".

Not only are his short stories fodder for film adaptation, several of his novels have made it to the big and small screen.  The Incredible Shrinking Man?  That was Matheson.  The Legend of Hell House?  Matheson.  What Dreams May Come?  Also by Matheson.  And for you romantic ladies (and men), Somewhere in Time, the Christopher Reeve / Jane Seymour movie was based on a Matheson book.  Plus such TV series as Rod Serling's follow up to The Twilight Zone, Night Gallery went to the Matheson well, as well did The Outer Limits, the Showtime series Masters of Horror and even a British TV series, Journey to the Unknown.

Matheson's third novel (the first two are largely unknown and probably forgotten by most people except real Matheson completists) was a book called I am Legend, the story of one man left alone in a world that is full of vampires.  (That was the original novel premise.  More on the movie adaptations and what they changed later.)  The novel, as indicated in the heading of the first chapter of the book takes place about a half a year after some catastrophe has drastically changed the human race.  It is never really explained, but sometime late in 1974 some disease started to kill off the human population of Earth.  (The events of the novel start 5 months after the events in January of 1976).

In the book, Robert Neville, a former factory worker (although that is pure speculation based on some bits of text, we never really know what Neville did before), is holed up in his house where he manages  to survive.  He goes out at daytime looking for surviving victims of the plague or whatever it is, the survivors having been turned into vampires.  For most of the novel he is alone, except for the vampires who continually show up outside his door each night shouting for him to "come out, Neville!"

Eventually Neville does try to learn a bit about the nature of the beast, such as it is.  For instance what makes the vampires detest garlic?  Why do they avoid mirrors?  Why are some of them afraid of the Christian cross, but others are not?  (He discovers that particular thing is only true of Christian vampires, but also discovers that Jewish vampires, while not deterred by a cross are deterred by a Torah, and Islamic vampires shy away from a Koran.)  He spends much of the novel trying to investigate what the origin of the plague that killed off most of the population and turned the rest into vampires.  Fortunately for him he has a whole library of book nearby to aid in his quest, but the reality is at the end he doesn't understand it any better than he did when he started. (Note: Unlike the movies, in the novel Neville was NOT formerly connected to anything in the science field).

When Hollywood came to call, they were interested in the one man against the rest of the world concept.  Unfortunately, as will be seen, they really didn't care about the vampires as much as they did about the idea of plague victims.  Throughout all three versions that hit the theaters, the "vampires" morphed into something else entirely.  For instance, in the Heston movie "The Omega Man", the enemy pretty much is just a radical religious sect of people who suffered deformities caused by the plague.  You really even couldn't call them zombies.  Sure, they are seeking the blood of Heston's Neville, but only for retribution from the harm he and the scientists have caused which made the world as desolate as it is, not as an element of survival.

The problem I have with The Last Man on Earth, aside from the subpar acting on nearly everybody's part, including, unfortunately, Vincent Price, is the fact that the plague victims are supposed to be vampires (witness the garlic, mirrors and stakes through the heart), but they act more like zombies.  (In fact this movie was one of the noted inspirations for George Romero's classic zombie flick, Night of the Living Dead, so that should tell you something.)

The movie changed the main character's name from Neville to Morgan.  THe original script was written by Matheson himself from his novel.  When casting came around, Matheson saw the Morgan/Neville character as a virile, macho he-man.  He was leaning towards Jack Palance as his odds on favorite to play his novel's hero, but casting decided to go with Vincent Price.  Although Matheson agreed that Price was a good actor, he was not what Matheson viewed his character as being.

That in itself would have been discouraging, but the producers added insult to injury by bringing in another scriptwriter, William F. Leicester, to make changes in the script.  The result was that Matheson asked that his name be removed from the credits, opting to use the pseudonym of "Logan Swanson".

Of the three "official" versions of the book, The Last Man on Earth is the least interesting.  It's not entirely bad, however.  Just the quality suffers a little.  (and it doesn't help that Rome, the setting for this version,  doesn't look a bit like the Los Angeles of the following two movies or the setting of the novel).

Charlton Heston is Neville, the star of the movie.  He plays a military scientist who, through a series of unfortunate events, becomes immune to the virus that has turned the rest of the world into albino religious nuts.  He goes out by day, hunting the plague victims and holes up in his penthouse at night while the plague victims, led by Anthony Zerbe, assail his fortress.  The basic premise of the novel of them being vampires was rejected in favor of them being just creatures who can't see in the daylight.  And instead of them seeking the blood of Heston for survival, they are only out to take out the last remaining member of a society that caused the plague to befall the Earth in the first place.

One of the added features is that Zerbe has formed a "Family", a pseudo-religious cult that seeks to eradicate all remaining evidences of advanced technology, which they see as evil.  As such, when at one point Neville is captured by the Family, they sentence him to be burned at the stake, much like the witches of Salem.  He is rescued by what turns out to be a crew of remaining members of the former world who, although not immune to the plague, have managed to stay free from it for the past year or two.  They are holed up in the outskirts of the town, and one member of the group, Lisa (Rosalind Cash), has a brother  Ritchie whom she thinks can be saved from the plague by Neville.

In this part we also see a change from the original novel.  In the novel, Neville never actually finds any survivors (although he briefly does hook up with a woman who may or may not be what she seems.)  The movie has to have a happier ending, so indeed there is some hope for the future at the end.  This is Hollywood sticking its fingers in the pie, because at the end of the novel it appears that there is no hope for a return to a society that Neville would call normal.

(For a more in-depth insight into this movie, see my review of The Omega Man that I wrote a few years ago.)

Once again, Neville is cast as a true scientist.  Will Smith garnered the role, and he searches for a cure to the plague. The original plague was started by an altruistic scientist who had morphed a virus into a supposed 100% cure for cancer.  Once again altruistic science goes awry, as it often does in apocalyptic fiction, and the cure takes on a life of it's own, turning it's people into pseudo vampires.  (Vampires whose bite transfers the virus to it's victims.)  This particular version comes as close as it gets to transferring the book's vampires to film, although in this film the "vampires" are barely sentient, more like animals.

This version benefits from a bigger budget in many ways.  First the CGI vampires are much more menacing than actors in make-up could do.  It was also a pretty good choice when Will Smith came on board as Neville.  (A far cry from the original expected star;  rumors circulated that when the idea of a remake came about 10 years earlier, Arnold Schwarzenegger was going to be cast in the lead.  This rumor was accepted about as reluctantly by Matheson's fan base as the decision to cast Michael Keaton as Batman was prior to that movie's premiere.)

In all three movies, there is a happy ending of sorts in that the main character manages to pass on a cure to the plague before his own untimely death.  As stated before this is Hollywood's finger in the pie.  The novel was not so optimistic.

As a footnote, there was also a made for direct to video movie I Am Omega, which was released basically to cash in on the then current release of I Am Legend, but since I never found a copy of it prior to press time I can't tell you much about it.

Drive home safely, folks.  And be careful of whom you see on the road. 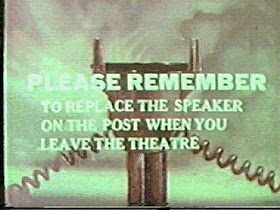