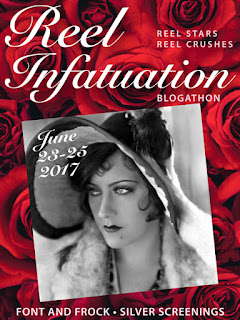 This is an addition to the Reel Infatuation Blogathon hosted by Font and Frock and Silver Screenings. 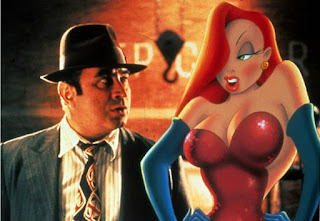 So says Jessica Rabbit to Eddie Valiant in the movie Who Framed Roger Rabbit? and in all truth, who cares?  She can be bad or good and she'd still be the hottest 'toon in 'Toon Town.  Of course, every red-blooded guy in the movie (and, like myself, probably quite a few in the theater audience) wish she was as "bad" as she looked.  But she's not.  She's a dedicated and loyal loving wife to her husband, Roger Rabbit, unlike a lot of the femme fatales you see portrayed by real women in film noir movies of which this was a parody.

Jessica is a lounge singer in a 'toon review club, with her Veronica Lake-style peekaboo hairdo, and a sultry style reminiscent of Rita Hayworth.  She was voiced by Kathleen Turner, with a soft breathy type style, but what really gets the blood pumping in the average male is the knockout version Jessica does of  a song originally done by Peggy Lee, "Why Don't You Do Right".  That singing wasn't done by Turner, however.  It was done by Amy Irving, who was married at the time to Steven Spielberg.  And Peggy Lee's version has nothing on the job Irving did for Jessica Rabbit.  And that sequined dress ain't such a bad enhancement either....

When you get right down to it, Jessica ain't exactly the safest thing on the planet, as one of the weasel cops finds out when he tries to search her in some rather indelicate areas of her person.  She's a 'toon, after all, so she comes equipped with some of the same abilities that the Coyote and the Roadrunner have, namely places to hide things that the average eye can't see until it's too late... 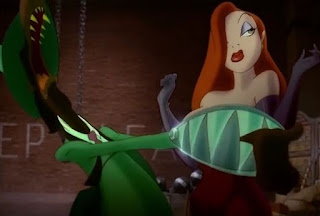 Even so, I could go for a chick like her.  And I'm not alone.  Empire Magazine once named her #6 on a list of the Greatest Animated Characters, surpassing many classic Disney and other characters.  Empire magazine also listed her in the top 100 Greatest Movie Characters (which included both real actors and actresses in roles such as Darth Vader, so it was some stiff competition.  Listal has her as #29 on a list of the sexiest female characters, too.  (See, I'm not just a freak...)

There is a rumor that the artists had some fun while drawing the character.  Seems like there are a couple of frames in which they drew Jessica completely naked, which can't be seen by the naked eye, but if you have a Laserdisc, and slow it down frame by frame, you can.... supposedly..  Now I can't verify this for certain, but since the rumor was published in Variety just prior to the release of the Laserdisc version in 1994, and when the Laserdisc was finally released it sold out in minutes all over the country., I'd say it sounds suspiciously like false marketing to me...  (If you guessed I wasn't successful in finding the naked Jessica frames... I categorically deny even trying...)

Once again I steered away from real actresses for this blogathon, because I figured it would be too tough to say I was infatuated with, say, one of the many Bond girls, and not that I found the actress portraying her sexy.  This way, I wasn't distracted by a real person.