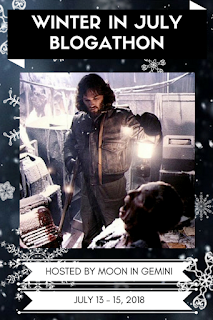 This is my entry in the Winter in July Blogathon hosted by Moon in Gemini. 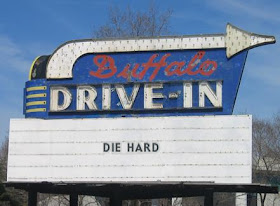 Christmas Eve in Los Angeles.  No snow.  Probably not even below 60.  (Although Sgt. Powell [Reginald VelJohnson] does sport a heavy jacket..)  Without the obligatory cold weather, the movie could easily have been mistaken as taking place in the summer (it was a summer release, after all, when it hit the theaters).  That plus Bruce Willis spends most of the movie in a tank top, even when he goes up on the roof, and there are no visible signs he is cold.

Die Hard has an interesting background with lots of tidbits that the average person does not know.  For one thing, it was meant to be a sequel.  The original novel, The Detective, had been filmed in 1968 with Frank Sinatra.  A sequel to the novel, Nothing Lasts Forever, was inspired by the movie The Towering Inferno, and believe it or not, Sinatra was given first shot at playing McClane, but since he was 73 at the time, he turned it down.  (Thank God!)

Bruce Willis only came on board after several other actors, including Sylvester Stallone, Harrison Ford, Charles Bronson and Nick Nolte had already turned it down.  Even Clint Eastwood, the man who actually owned the rights to the movie, was considered, but by the time the movie was actually in production, Eastwood was pushing 60 and also a bit old for the part.  Willis got the job, his first starring role in an action movie (and only his third movie overall, but the first two were comedies), only because there was a hiatus from his Moonlighting TV show (due to Cybill Shepard's pregnancy).

Also this was Alan Rickman's first big role in a movie.  (He had a career in TV in the UK prior to this, but it was the first role he had in a major motion picture).  Other familiar faces in the movie are the aforementioned Reginald VelJohnson who went on the greater fame as Steve Urkel's foil on Family Matters; Paul Gleason, who has been the bad guy several movies; William Atherton who made a career out of playing obnoxious jerks; Bonnie Bedelia, whom I first noticed in the TV version of Stephen King's Salem's Lot.  You might also recognize a few others:  Al Leong has appeared  as Asian bad guys in many movies;  Robert Davi, who was the drug kingpin in the James Bond film,   License to Kill; and maybe even Grand L. Bush (among other roles he was one of the four Sorels in the film Streets of Fire).

If you're looking for a movie to make you feel cool and comfy by the fireplace, this not one to get.  But if you want action and a few bon mots that imply a Christmas feel, it is a good choice. 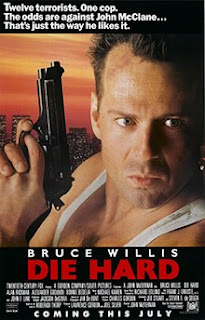 The plane lands in Los Angeles, where New York cop, John McClane (Bruce Willis) has come to see his wife and kids.  Holly (Bonnie Bedlia) and John are deeply entrenched in their own respective careers.  Holly has taken the kids and moved out to California because she has a good job as an executive for the Nakatomi Corporation.  (The two aren't divorced, but it is implied that they are separated.  John is as deeply devoted to his career as a New York police detective as Holly is to her career as an executive.)

Waiting for John at the airport is a limo driver, Argyle (De'voreaux White), who has been hired by Holly's boss to bring John to the office where a Christmas party is in progress.   Meanwhile, a mysterious truck is making its way across the city, and of course, it's destination is the same building.  Upon arriving at the building John discovers that Holly is using her maiden name, which doesn't set well with him and causes immediate friction upon their meeting.

The mysterious truck arrives and disembarking are a crew of well dressed men, not exactly terrorists, although their actions are easily construed as such.  The cast of bad men is led by Hans Gruber (Alan Rickman) and a cast of 11 associates, mostly Germans, albeit with a token couple of non-Germans, including Al Leong and Clarence Gilyard, Jr (who often showed up on TV's Matlock).  While John is relaxing in the executive washroom, the hoodlums take the Christmas party hostage. 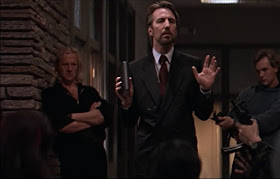 Insisting that they are not terrorists, but just a bunch of high-class robbers, Gruber demands that Holly's boss, Mr. Takagi (James Shigeta) give him the codes to open the vaults, but Takagi claims he doesn't know them.  So Gruber shoots him and they have to go to plan B; break into the security systems.  While the computer expert of the clan works on trying to bypass he security system, Gruber and clan have to focus on the fly in the ointment, John, who has killed one of the terrorists and now has a machine gun (Ho! Ho! Ho!) and a radio. 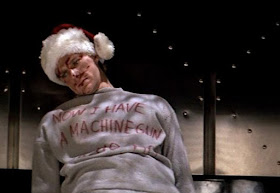 John tries various tactics to try to get the authorities attention.  He sets off the fire alarm, but one of Gruber's associates manages to convince the fire department it was a false alarm.  John also tries to get the police to show up, but as is typical of these kinds of movies, the police think its just a crank call.  But they do manage to send one lone patrolman, Officer Al Powell (Reginald VelJohnson) to the scene.  Powell is also convinced that the emergency is a crank and starts to drive away, but John sends the body of another terrorist he has killed crashing down on top of the patrolman's car.

Finally, the authorities start to arrive, but the men in charge are just as ignorant and self-obsessed as any movie authorities usually are.  Deputy Chief Dwayne Robinson (Paul Gleason) even reprimands Powell for falling for a ruse because he thinks John is just another one of the terrorists.  And to top things off, the power-hungry FBI show up, and if you watch these kinds of movies, you know exactly what you get when the FBI shows up. 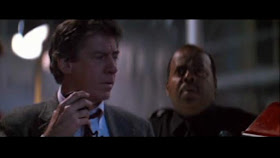 After several failed attempts by the less than competent bigwigs, including a failed attempt to rescue the hostages (which were going to be blown up anyway as part of the escape plan of the terrorists, it is up to John to save the day (and maybe his marriage). 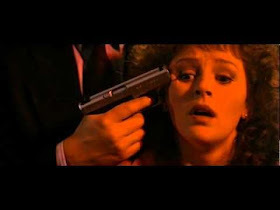 That's it from the back seat this time, folks.  Personally I'm going to take John McClane's advice and stay out of tall buildings.