Out of this Worlld with Bugs Bunny

This is my entry in MovieMovieBlogBlog's One of My All-Time Favorite Cartoons Blog-a-thon! 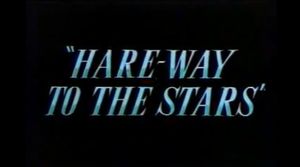 My absolute favorite Bugs Bunny cartoon (my favorite cartoon period) is "Hare-way to the Stars".  In my younger days I used to relate the plot to this one scene-by-scene to friends (or any captive audience who would listen...)  It still remains fresh today as it did when I first saw it on the Saturday morning cartoon show, The Bugs Bunny/Road Runner Show.  (I'm old, but not old enough to have seen it at the theater)

The story is done by the great combination of Chuck Jones as director and Michael Maltese as writer, the same duo who gave us such other gems as  "Rabbit of Seville" , "Rabbit Fire", "Beanstalk Bunny" and even the Daffy Duck classic "Duck Amuck", any one of which could have been on this "all-time favorite" list for me.
,
I think in order to appreciate Bugs Bunny, you have to have a sarcastic streak in yourself, and be a person who has to be on the winning side of the argument, both of which describe me to a T.  Bugs almost always ended up with the winning poker hand, so to speak, and that has more to do with his personality than it does with pure luck.  When most cartoon characters (and most people) would concede and just go home, Bugs still has some fight left in him.

Hare-way to the Stars starts off with a rocket being moved into position to be blasted off into space.  The rocket ends up over Bugs Bunny's hole.  Meanwhile, below, Bugs is waking up from a "hangover" after a night of mixing carrot juice with radish juice.  Grabbing a towel, with a wistful " I hope the lake is warmed up" he begins the ascent out of the hole.  As he climbs, he ends up in the bowels of the rocket.  "Boy the hole seems long this morning!"  He gets to the top of the rocket and exclaims "Hey...who plugged up the hole".  Meanwhile the rocket has blasted off and is now deep in space.  Bugs unscrews the top of the rocket and is surprised to see the Earth rapidly moving way from him, but before he can react he is knocked off the rocket by an errant satellite and is deposited on a space station. 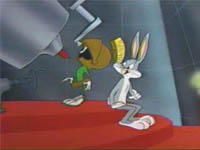 Bugs first encounters Marvin, the helmeted nemesis of the cartoon, scurrying along with his Illudium Phew-32 Explosive Space Modulator which,he, Marvin, has finally perfected.  The device is essentially a stick of dynamite, but that's just the MacGuffin of the story.  After being told that the Earth will not be in existence much longer because Marvin is going to blow it up (it obstructs his view of Venus), Bugs steals the modulator. An exasperated Marvin shouts "That creature has stolen" the modulator and immediately gives chase.  But he needs help. 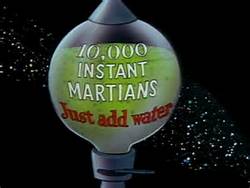 Enter instant martians (just add water).  Marvin grows a few of these and sends them off to capture Bugs and return the modulator to him.  However, Bugs is a bit more quick-witted than any instant martian (who probably could have used a little more water on the brain...).  Through a series of pratfalls and comic twist Bugs manages to defeat all of the Martians, including one scene on space scooters that is absolutely hilarious. 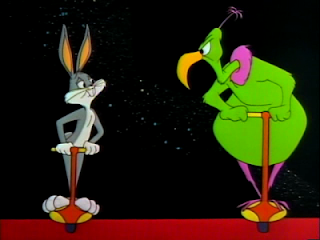 At the end, Bugs manages to find a saucer, and while erratically trying to get it under control, manages to switch the Illudium Phew-32 Explosive Space Modulator, now lit, with the bottle of instant Martians, about the same time that Marvin is going to get more Martians to stop Bugs.  Marvin finds himself holding the modulator and is ecstatic to have it back, but the modulator explodes, destroying the space station and roughing up Marvin, who sighs "Well, back to the old drawing board..." 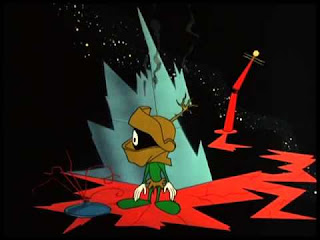 Meanwhile Bugs has made it back to Earth, crash landing into a sewer.  The earth rumbles and Bugs comes up in a panic, as little Martian heads start popping up in the cracks.  He runs off, exclaiming to the audience "Run for the hills folks, or you'll be up to your armpits in Martians!"

The cartoon was released on March 29, 1958.  An interesting thing to note:  The satellite that bumps Bugs off the rocket is, apparently, supposed to be Sputnik, the Russian satellite, the first one to be put into orbit.  Sputnik had been launched just a few months earlier in October of 1957.  But it would have decayed to nothing by January of 1958, so if Bugs actually went into space in March, it couldn't really have been Sputnik that bumped him off the rocket, could it?  (You weren't expecting a history lesson, were you?  Don't worry, it won't be on the test.)