Unfortunately, kids, I've been way over booked on my time this week and did not have time to watch any movies.  Which is a shame, because this is one of the first weeks in a while that I have not had a blogathon in the works and had time to review movies just for my own sake.  But in the meantime, to tide you over until the next review, I decided to do a review of one of the best movie reference books to come out of the great publishing corporations of Ursa Minor ( alternately known as Warner Books). 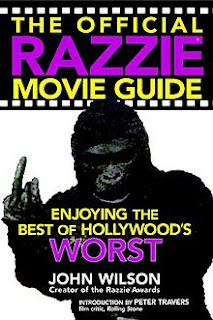 The Official Razzie Guide: Enjoying the Best of Hollywood's Worst by John Wilson

John Wilson, in case you didn't know, is the creator of the Golden Raspberry Awards, affectionately known as the Razzies, which is an award given each year (since it's inception in 1980) to the worst movie, actor, actress etc. of the year.  Much like it's bigger brother, the Oscars, movies and personnel are nominated for the annual Razzie.  The awards are usually given the day before the Oscars ceremonies and celebrates, sometimes even revels in the worst that Hollywood has to offer.

In 2005, the Razzies celebrated 25 years with the publication of this book.  Divided into several sections which include such titles as "When Mad Scientists Go Bad", "Disasters in Every Sense" and "They Came From Planet Razzie", the book delves into movies over the span of history (or at least sometime before the inception of the Razzies).  While the book does spend a lot of space covering movies that were nominated for Razzies in the release year, Wilson also devotes time to some entries that came out before the Razzies were introduced.

One such movie is "The Ten Commandments".  A beloved tradition, especially among fundamentalist Christians, even this movie gets the Razzie treatment from Wilson.  Noting the over the top performances and sometimes ridiculous dialogue, the author sends the beloved movie to the showers, so to speak.  And he does the same for a couple of other movies that have a devoted following.  But mostly he spends time on such ridiculous (and acknowledged "worst") movies as "The Brain that Wouldn't Die", "Battlefield Earth", "Robot Monster", "Santa Claus Conquers the Martians" and the two movies featured on a double bill that inspired Wilson to create the Razzies, "Can't Stop the Music" and "Xanadu".

Each entry includes a couple of excerpts from movie reviews, both contemporary newspaper ones and ones from fellow movie reference books.  There is a list of the major cast and crew behind the movie, and then an encapsulation of the plot ("Plot?  What Plot?") that is  at times both informative and hilarious.  Included in each review is also an example of "Dippy Dialogue", which even taken out of context of the movie is pretty freaking funny.

There are about 100 such reviews included in the book.  A great night time bedside reader.  The book, I might add, is also a preview to some movies you will see reviewed in future entries on this blog.