Nightmare on the Farm 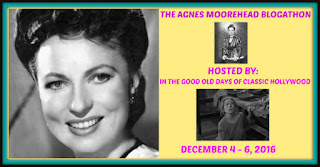 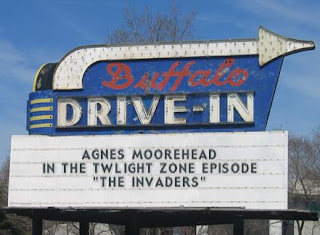 Agnes Moorehead made a name for herself for being a witch.  If you have never heard of Moorehead except for her role as "Endora", Samantha Stephens mother and Darren's mother-in-law, you would find her memorable.  But that is not the extent of her career.  She started out on radio, back when radio broadcasts were what prime-time TV is today.

According to wikipedia she became a voice in demand, and after meeting Helen Hayes, was encouraged to try film acting, but early efforts were not very fruitful, so she returned to radio.  It was her fortuitous meeting with Orson Welles that seems to have been the spur of her career, however.  Working with Welles on his Mercury Theater, and also as the voice of Margo Lane on his radio show "The Shadow", she began to get regular exposure.  Welles also took her with him to RKO and cast her in his Citizen Kane, as Kane's mother.

Moorehead continued to work with Welles, and as result, became a character actress, appearing in many films during the 40's and 50's, including some notable evil roles (see Dark Passage).  But she also played many sympathetic roles and comedic ones.  Beginning in the early 50's she also found a niche as a guest star on numerous TV shows, as well as the co-starring role as the previously mentioned Endora.

Although her voice was a big draw for he career, perhaps one of her best roles involved her not saying a single word, rather instead supplying a few frustrated grunts and whines to accompany a pantomime exhibit as "the Woman" in the Twilight Zone episode "The Invaders".


"The Invaders" (An episode of The Twilight Zone)

"The Invaders" was the 51st episode (the 15th episode of the 2nd season) of the classic anthology series, The Twilight Zone.

It was written by Richard Matheson, an icon of the series, having written 16 episodes, and at least 2 or 3 of those episodes are included on any TZ favorites list, including one of favorites, Once Upon a Time, in which Buster Keaton stars as an 1890's janitor who longs for a quieter world, and uses his boss' time travel hat to go to the late 20th century.  Matheson also authored numerous novels and short stories which were adapted as films and other TV series episodes.  (I Am Legend was filmed at least three times, including one version, The Omega Man, with Charlton Heston).

The episode was directed by Douglas Heyes.  Heyes directed 9 episodes of the series, and was also prolific as a director on numerous other TV series over his career.  He also directed the John Forsythe/Ann-Margaret drive-in classic Kitten with a Whip, which I hope to review someday...

Agnes Moorehead stars in the "Invaders" episode, and is, in fact, the only acor we see on screen for the duration of the episode (not including the usual appearance of Rod Serling as the host of the series).  Moorehead plays a woman who is isolated in a remote place in the country, in a house unfettered by such trappings of modernity like a phone or electricity,  As the episode begins Moorehead (hereafter referred to by the appellation "the woman", which is how she is credited) is fixing up a dinner on her primitive stove, by candlelight. 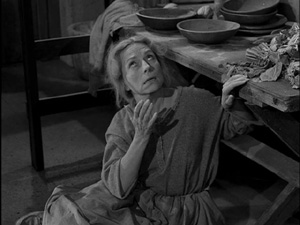 She begins to hear an odd whirring sound which causes her to wince in pain.  She hears a thump in her attic and goes to investigate.  When she opens the attic door she finds a saucer spaceship there.  (How the spaceship was able to get into her attic is not explained, but it is a question I asked myself.  I tend to nitpick things like that...) 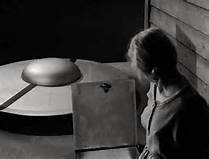 While the woman is looking at the spaceship in curiosity, a door in the side opens and a robotic figure shambles out.  (These robots we see in the picture are just essentially toy robots you could find at any toy store in the 60's, but God, the way Heyes used them to enhance the fear and frustration of the show is pretty phenomenal.) 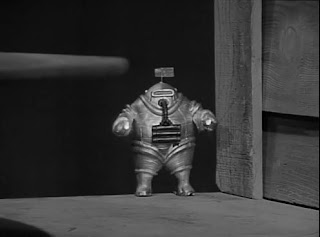 Thus begins a showdown between the woman and these robots.  Two robots eventually come out of the spaceship and the panicky woman, confused by the situation, desperately tries to, alternately,  avoid, contain or kill the invaders.  Moorehead deserves kudos for being able to pull all of this off without uttering a single word.  You can almost watch the entire episode without even realizing that she stays mute (aside from the grunts and groans) throughout the episode. 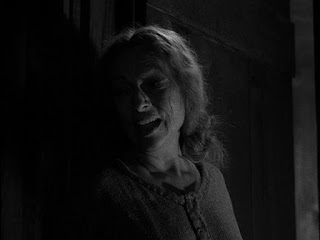 Spoiler alert:  At this point I am going to reveal the ending, so if you are among those few who have never heard how this episode ends, and want to watch it first, stop reading.

The woman finally disposes of one of the robots and goes up to the attic and attacks and destroys the spaceship (with an AXE!  Must've been some shoddy workmanship on that spaceship...) 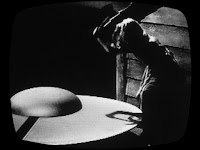 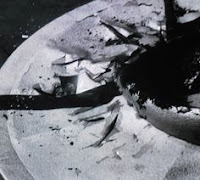 At this point a voice is heard, a distress call by the remaining invader still on board (the voice of director Heyes, and the only words spoken in the entire episode):

And then the camera pans away to reveal that this spaceship is from....Earth!  (da da dah dah! da da dah dah....)  BTW, if that spaceship looks familiar, it's the same one they used in the movie Forbidden Planet. 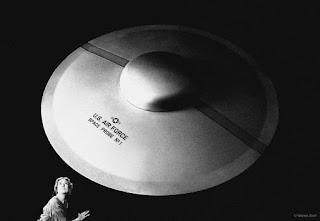 It's my personal opinion that Moorehead should have been at least acknowledged with a nomination for an Emmy for "Single Performance" for  this episode.  It can't be easy to pull off what she did without uttering even a single word or even having to interact with another actor on screen.

That's it from the couch this week.  Your humble blogger will be back viewing stuff on the big screen next time.