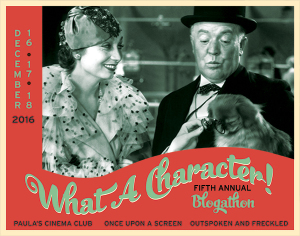 This is my entry in the What A Character! Blogathon, hosted by Outspoken and Freckled, Once Upon a Screen and Paula's Cinema Club 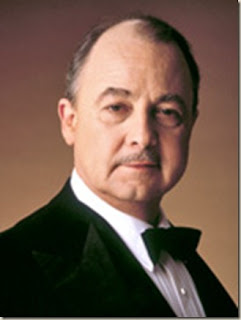 John Benedict Hillerman was born on December 20, 1932 (which means he will be 84 this year, and yes he is still with us as of this writing).  He was born in Denison, Texas (which makes him a neighbor of mine, more or less, because I was raised in Pottsboro, just 10 miles west of Denison.)  After graduating high school, he went to the University of Texas, where he majored in journalism.  I'm not entirely sure he graduated, however.  What wikipedia tells me is that in 1953, after 3 years at UT, he joined the US Air Force.

It was here that he started getting into acting, working with theater groups on the side during his term of service.  After his discharge, he moved to New York City, where his career really began. He worked on Broadway from the late 50's, and graduated to television and motion pictures by the early 70's.  His first on screen role was as a reporter in They Call Me Mr. Tibbs!, the sequel to tIn the Heat of the Night.

For the next 29 years, he was an outstanding addition to films and TV shows.  He spent his time almost equally between being a guest star on some of the best TV shows of the day (3 times on Mannix, twice on both Hawaii Five-O, The Love Boat and Murder, She Wrote.)  He was a cast member in many movies at the same time, too.  You can catch him in such diverse flicks as The Last Picture Show, High Plains Drifter and What's Up, Doc?.

For the purposes of this entry I just want to focus on four roles, however.  Ranging from comical to serious, all of them have a theme, for me, of pomposity and/or refinement, which basically is what I think of when I think of Hillerman.

The first time I ever saw Hillerman was in Blazing Saddles.  He plays Howard Johnson (the same Howard Johnson, supposedly, that became the ice-cream magnate, but that's part of the joke of the movie).  Howard Johnson is among the residents of the town of Rock Ridge (all named Johnson...) who are being railroaded into leaving town so that an unscrupulous land baron.  Even in humor, Hillerman comes off a bit pompous in the role which, at least in this case is endearing. 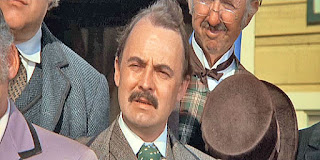 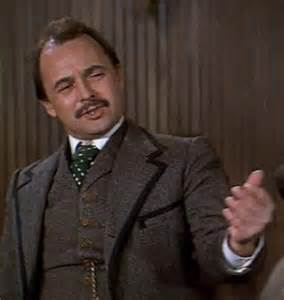 "As honorary chairman of the welcoming committee, it is my privilege to present a laurel and a hearty handshake to our new.....n****r...."

Bart: "Can't you see that's the last act of a dying man?"
Howard: "We don't care if it's the first act of Henry V...we're leaving"


The second time I saw Hillerman was in Chinatown, the Jack Nicholson neo-noir thriller.  In this movie Hillerman played a city employee, Russ Yellburton, who may or may not know what happened in the death of Jake Gittes' client's husband.  Yellburton oozes smarminess in his scenes with Jack Nicholson, and manages to talk down to the detective even when he is pretending to try to help.

"My goodness, what happened to your nose?"  Jake's nose has been sliced hoods.  When told that he, Jake, cut himself shaving, Yellburton in a rather snobby tone says "You ought to be more careful.  That must smart."


The only other movie I have actually seen that featured scenes with Hillerman was Paper Moon.   Hillerman has two roles in this one, brothers, in a small town.  One is a bootlegger and the other is a sheriff's deputy.  Ryan O'Neal's character, a con man, manages to steal some of the bootlegger's booze and sell it back to him, thinking no one is the wiser.  But the deputy brother chases him.  Later, after O'Neal has crossed the state line, thinking he is safe, the deputy shows up with a couple of muscle men and beat the crap out of him. Hillerman is OK as the bootlegger, but he is even more memorable as the deputy. 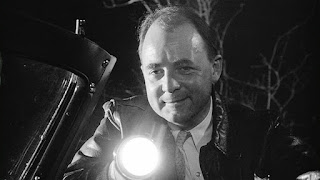 Most people, however, will recognize him for his most iconic role, as the pompous and refined Johnathan Quayle Higgins III, the caretaker for Robin Masters estate, on which Thomas Magnum (Tom Selleck), a private investigator on the side,  is in charge of security for the estate.  For the 8 seasons run of the TV show Magnum P.I., Higgins carried on a love-hate relationship reminiscent of Laurel and Hardy (to me).  My sister was a huge fan of the show, and since we only had one T.V. and had to share, I either had to watch that or nothing.  But as it turns out, unlike a lot of other crap my sister liked, this was a pretty good show. 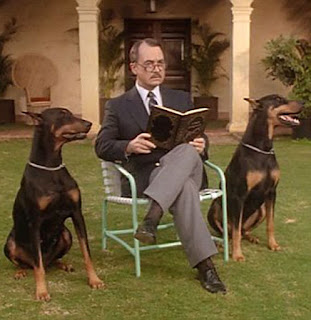 There are lots of classic lines, but to the devotee of the show, there could be only one:


Happy 84th birthday to one of the best character actors in the business.  He's been retired for the past 15 years or so, but his mark on the film world is still memorable.