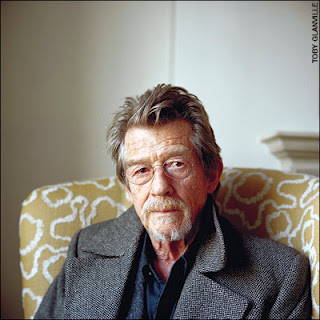 This blog has never been one for honoring passing celebrities.  I usually reserve that for others because I find that dwelling on the passing of celebrities a bit too maudlin.  John Hurt however was instrumental in my life in one particular aspect.  And it was because of this that I present this small memento to him.

In 1980, Hurt was cast as John Merrick in the movie The Elephant Man, a man who suffered from an extreme case of a nervous disease which, at the time, I was told was neurofibromatosis.  It turns out that it was something entirely different, but I connected with the character just the same, because I have neurofibromatosis, although not in such a drastic case as John Merrick, the character Hurt played in the movie.

Hurt as Merrick dealt with this in such a heartbreaking and transforming manner, his famous quote from the movie helped me deal with the changes that were coming over me at the time ("I am not an animal! I am a human being! I am a man!")  This is not to say I was a sideshow freak or to claim any such drastic calamities that Merrick suffered, just that I was able to deal with my own problems in life as a result of seeing Hurt overcome his own character's problems.

Hurt went on to be one of the more prolific actors of his age.  Some other memorable performances were as the unfortunate first victim of the alien in Alien, the rather slimy Lord Graves in King Ralph, Garrick Ollivander in the Harry Potter movies and Winston Smith (with Richard Burton) in Nineteen Eighty-Four.

One of the performances I remember in particular was the movie Partners.  I saw this movie as the second feature at a double feature at the drive-in sometime in the early eighties.  (Like a couple of other such instances I cannot recall what the first feature film was, the one that was being shown to draw in the crowd in the first place, but I still remember this one well.)  In it Hurt played a gay policeman who was paired with Ryan O'Neal, a straight policeman, to go undercover in the gay community of Los Angeles to find out who was killing homosexuals in the area.

In retrospect I realize this movie is not all that good, and definitely, from my reading of reviewers at the time, comes off as not very respectful towards the homosexual community.  It remains in my memory, however, and despite the fact of only having seen it that one time, I can still recall quite a bit of it.  It remains as one of only a ½ dozen movies in which I have seen Hurt. These are the aforementioned The Elephant Man, Alien, King Ralph, Partners and two others in which he only had cameo roles.  He was in several movies that are still on my radar but haven't gotten around to watching yet, including Indiana Jones and the Kingdom of the Crystal Skull (don't ask why I haven't seen that one yet, because even I can't answer that one). I have not, and probably won't see any of the Harry Potter  movies, unless I have to babysit someone's kids...

Still I think John Hurt will be missed.  I certainly will miss him.