Not Your Average Job 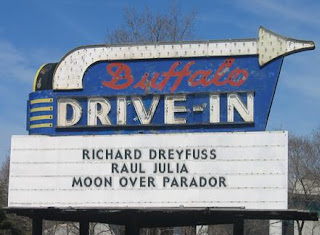 This movie takes the classic tale of The Prince and the Pauper and twists it around to a new direction.  The film is actually a remake of a 1939 film, The Magnificent Fraud (of which I hadn't even heard, much less seen.  I found this tidbit on the wikipedia site.)  The 1939 movie in turn was based on an unpublished short story by Charles G. Booth, Academy Award writer of The House on 92nd Street.  This movie was directed by Paul Mazursky, who had a flair for combining comedy with the social issues of the day.  (See the previously reviewed Down and Out in Beverly Hills)

BTW, a similar idea to the plot of this movie was introduced in the Ivan Reitman  / Kevin Kline film from 1993, Dave.  I don't think there's any relationship between the two. 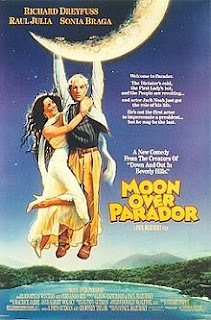 
Jack Noah (Richard Dreyfuss) is a struggling actor who loves his job way too much to give it up.  He is constantly looking for new work, and as such, is at a casting call in New York City, where he meets up with two friends.  Asked where he has been, since neither of them had seen him for  about a year, Jack relates the tale of where he has been.

He was on the set filming a movie in Parador (Brazil makes the role for the fictional country).  While the casts welcomes the dictator Alphonse Simms (played by Dreyfuss' brother, Loren...did YOU know he had a brother?  I didn't...), Jack is coaxed into doing his impression of Simms.  Shortly thereafter, Simms, who is an alcoholic, dies of a heart attack brought on by the consumption of alcohol.  Roberto Straussmann (Raúl Juliá), the dictator's head of the Secret Police, kidnaps Jack and forces him to pose as Simms.

Although this was to be only temporary, it extends to a long session for Jack, who at first is buoyed by the fact that he is accepted as Simms, massaging his actor's ego ("Phht on Bobby DeNiro"), it eventually wears on him.  But he is encouraged to continue with the subterfuge, both by threats from Straussmann, and eventually by his relationship with Simms' mistress, Madonna (Sonia Braga).  Madonna, for her part, immediately becomes aware of the plot, but encourages Jack to continue, because the alternative would be to leave the country in the hands of Straussmann and his Fascist cronies.

In the meantime, the American C.I.A has their own reasons for not seeing a change in the government.  An agent, posing as a retired civilian, keeps an eye on Simms and Straussmann and tells them to keep the "Commie" rebels who want a change in the system under control.  When Jack sees what is really going on behind the scenes, he makes plans to accomplish a change himself.  I won't tell you what he does, but since at the beginning he is back in New York City, it won't be a spoiler to tell you he doesn't continue on as the dictator.

Dreyfuss, of course, is at his usual level as an actor, and with the addition of Juliá, this is a special treat.  Both Juliá and Braga were nominated for Golden Globes for their roles in the movie.  Don't miss out on an hilarious cameo by the director as Simms' mother.


A rather short review this week.  I'm overwhelmed with other responsibilities.  Including two more reviews I need to get completed before the next week runs out. 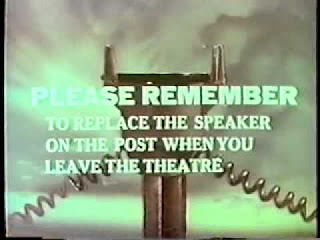