Go ahead, make my day! 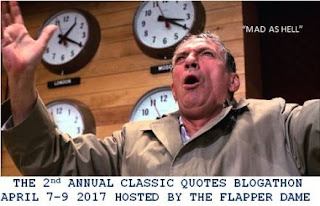 This is my entry for the Great Movie Quotes Blogathon hosted by The Flapper Dame.

Harry "Dirty Harry" Callahan, a character who was essayed by Clint Eastwood in 5 movies, is the ultimate "I don't give a rat's ass about the rules" character, and one of my heroes of the cinema.  Dirty Harry was always at odds with his superiors, never taking bull**** lying down.  Never taking bull****, period, for that matter.  The Dirty Harry series were rife with memorable lines, like "Do you feel lucky...PUNK?"  (Which has been misquoted actually...The tail end of the actual quote is "You gotta ask yourself a question...'Do I feel lucky?'...Well, do ya, PUNK?")

In 1983's Sudden Impact, early in the movie, Harry goes in to the Acorn Cafe to get a cup of coffee, where he discovers a robbery in progress.  Harry takes out all but one of the robbers, the sole robber then takes a hostage and threatens to shoot her.  Harry utters the immortal line, which basically encapsulates his "screw it all" attitude.  The scriptwriter, Charles Pierce, pulled the line from his own childhood.  According to him, his father used the same threatening line on him when he was a kid.

The line gained a new life of it's own when at a business conference, then President Ronald Reagan used it to emphasize his intention to veto any tax increases from Congress

People have a love for the underdog and the buckers of the system.  "Go ahead, make my day" has been honored as one of the greatest movie quotes of all time, ranking #6 on the list.