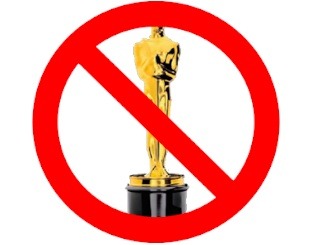 Since it's inception in 1929, there have been numerous times that a movie has been nominated for multiple awards in what is affectionately known as the "Big Five"  (Best Picture, Best Actor, Best Actress, Best Director and Best Screenplay). Although not quite as often as getting two or three of the categories for nominations, there have been a total of 43 movies that managed to get nominated for all five awards.  Some years had multiple movies that achieved this accolade, but the mathematical fact is that in 36 of the 89 Academy Awards shows at least one movie managed to be represented in the Big Five.

That comes out to 40% of the time that a movie had a nomination in all five categories.  Odds would say that a movie with this sort of representation at the awards ceremony would come away with at least one or two of the awards and, indeed, most of them did manage to take the stage to accept at least one of the coveted statuettes.  Three of them skipped out the door with all five.  {It Happened One Night (1934), One Flew Over the Cuckoo's Nest (1975) and The Silence of the Lambs (1991)}

On the other side of the coin, 8 of the movies in this category were snubbed for all five nominations.  Now in all fairness, the losers lost to equally worthy films, but it must have been hard on all those involved to find themselves going home without the ultimate Hollywood accolade.  In point of fact, 3 of the movies in that list did manage to get an award in other categories, just not one of the Big Five.  But that still leaves 5 movies that had multiple nominations but were sent home empty-handed at the end of the night.

I am going to be writing a series of blog entries I am calling The Also Rans. These will appear intermittently, whenever I feel like writing another entry, and the first eight entries will be dedicated to those eight movies that failed to achieve one of the top Big Five.  Later I may expand it to movies that received multiple nominations in other categories, and failed to receive any awards (there are quite a few), but initially I am only going to cover these eight.  The eight are (in alphabetical order): American Hustle (2013), Atlantic City (1981), Bonnie and Clyde (1967), Cat on a Hot Tin Roof (1958), Lenny (1974), Love Story (1970), The Hustler (1961), and The Remains of the Day (1993).  Expect a review on each of these in the coming months.  Expect the first one sometime later this week.