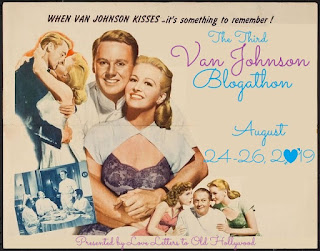 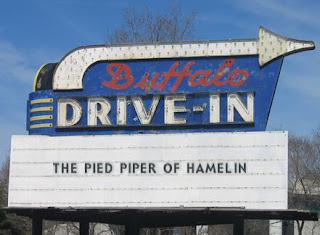 Van Johnson could act.  (I particularly liked his acting in such war movie classics like Thirty Seconds Over Tokyo, Battleground, Go For Broke! and The Caine Mutiny, but he had a distinguished career as a leading ladies man, too.)

Van Johnson could sing.   (As The Minstrel, one of the nemeses of the 60's Batman, he doesn't get too much singing time, but Brigadoon features some singing, as well as a few others that I haven't seen.)

Van Johnson could dance.  (Hell, he started out his career in the chorus line, and anybody whou could keep up with Gene Kelly deserves some praise.)

Van Johnson (probably) couldn't play the flute, however.  Wikipedia says the flute playing he did in The Pied Piper of Hamelin was dubbed.  But that shouldn't be counted against him.

The Pied Piper of Hamelin was a made-for-TV film from 1957 which starred Van Johnson in a dual role; as Truson, a native of Hamelin, and as the Pied Piper himself (although "pied" is kind of a misnomer.  You see, "pied" means multi-colored, but the Van Johnson piper is only wearing red and yellow.  Not exacly "Multi" colored.) 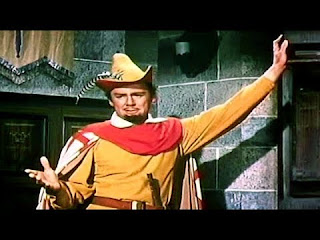 The story follows the plot of the original fairy tale with some added plot devices to help flesh out the stoty, and is rather well done from a 50's standpoint. 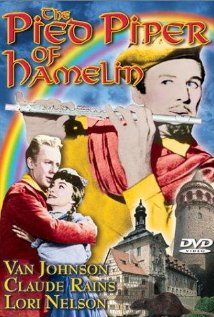 In Hamelin, the whole town is striving to get a special tower and clock completed in time for the arrival of the King's emissary.  The are in competition with every town in the country to win the banner for best improvement (or at least something of that nature)

To this extent the Mayor (Claude Rains) and his council outlaw school, play and general fun for the kids in an effort to get them to help build the clock tower in time for the eminent arrival of the King's emissary.  The thorn in the Mayor's side is a rival town, Hamelout (HamelIN, HamelOUT, *groan* the writers don't get any points from me for originality and creativity...). 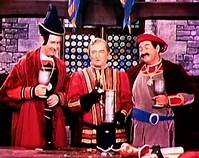 Truson (Van Johnson), the town's schoolteacher objects to the Mayor's hard hearted handling of the production, but his pleas fall on deaf ears.  The Mayor is determined to beat his rival of Hamelout in having the best display for the banner.

The Mayor's daughter, Mara (Lori Nelson) agrees with Truson.  She and Truson are also in love, but the Mayor has other designs for his daughter (namely to get her wed to the King's emissary, which since he hasn't shown yet, and thus unseen, is only a ploy by the Mayor to get more prestige for himself and his town. 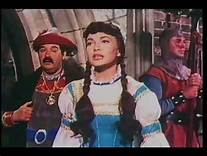 Fate lends a hand when Hamelout is devastated by flooding.  But Hamelout's woes also become Hamelin's woes as all the rats that previously had their homestead in Hamelout migrate to hamelin and make a grubstake their instead.  The people are outraged and demand that the Mayor do something about the influx of rats.

To the rescue comes the mysterious figure of the Pied Piper.  He tells the council that he can get rid of the rats with his magical flute, but he demands basically every red cent in the city's coffers for the job.  Eventually the Mayor reluctantly agrees, fully expecting the job to not be a success and therefore he won't have to pay.  but the Piper is true to his word and leads all the rats to drown in the river.

Of course, if you are familiar with the fairy tale (and who isn't, I wonder), the Mayor reneges on his deal.  Truson, of course, insists that the mayor pay up, but he is jailed as a traitor for his efforts.  And the pier goes off, swearing revenge.  Which happens that very night as he leads off the children of Hamelin with his flute into a cavern in the nearby mountain.  A cavern that seals off behind them and no amount of artillery can seem to break through.

Of course, since this is 50's TV and not Grimm's fairy tales (which actually ends with the children NEVER returning), all things come to an end and everybody lives happily ever after.