Waiting for The Snake 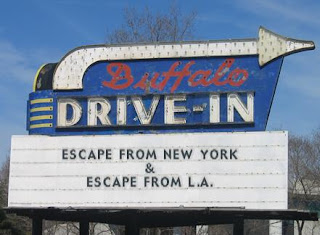 John Carpenter is my favorite director, and by extension, I guess you could say Kurt Russell is my second favorite actor (John Wayne is still #1).  The reason I say Carpenter is my favorite director and Russell is #2 on the list of actors  is because on my top 10 list of favorite sci-fi/horror movies, Carpenter/Russell collaborations occupy four of the spaces, Big Trouble in Little China, The Thing, and the two objects of today's post, Escape from New York and Escape from L.A.

One-eyed ne'er do well S. D. "Snake"  Plissken is a World War III Special Forces war hero, garnering two Purple Hearts, and being the youngest soldier to be decorated by a U.S. President.  But he turned to a darker side after the war, committing various criminal acts.  He avoids capture quite a bit, but does eventually come under the control of the prison system at various times in his career (hence the ability to have not one, but two feature films of his exploits in the criminal justice system.  His only real nemesis is himself, although he is driven by an intense hatred for the justice system and the nation and its political system in general.  In other words he doesn't "give a F*** about your country or your President". 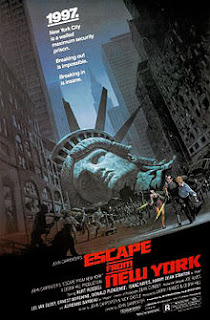 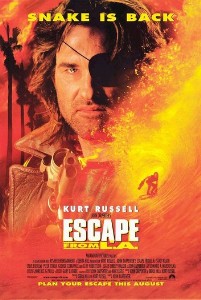 The pre-history to this one involves a rise of crime to astonishing levels.  As a result, the government converts Manhattan Island into a ultra-high security prison, building a containment wall around it, mining all bridges and tunnels, and sending all criminals into the prison, with just one rule: Once you go in, you never come out.  The prison itself is then allowed to run it's own self within the confines of the walls.  Gangs and cutthroats run their own system within.

Into this mix, Air Force One, the President's plane, is hijacked by revolutionaries and crashed into the center of New York.  The President (Donald Pleasence) [a President with an English accent, What IS the world coming to?] is launched before the crash in an escape pod.

Police forces, with Police Commissioner Bob Hauk (Lee van Cleef) are dispatched to rescue the President, but before they get there the President is captured.   Hauk and his contingent are told to leave immediately or the president will be killed. 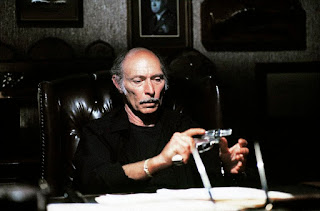 Meanwhile, Snake has finally been captured and is being processed for internment in the prison.  Because of his experience as a guerilla war soldier, he is given a chance to redeem himself by Hauk, with all past iniquities removed from his record.  All he has to do is infiltrate the prison, find the President, and get him and his secret info back to civilization in 24 hours.  This is the overriding suspense of the story because a) the President has to deliver the secret info he is carrying in less than 24 hours, and b) to insure that Snake cooperates with the authorities, he has been injected with microscopic nuclear bombs which will explode if he doesn't get back in time.  (Thus preventing him from just taking off and saying "Screw it.")

Upon landing (at the top of the World Trade Center) he immediately descends into the chaos that is the prison system in New York.  Using a locating device he finds himself in an old theater in which, watching the floor show, among others, is "Cabbie" (Ernest Borgnine).


As referenced in the above caption, a running theme throughout the movie is whenever Snake meets up with someone, the first comment from the is "I heard you were dead."  Obviously these people don't know Snake Plissken.  You can't kill a snake that easy.  Anyway Cabbie informs snake that the Duke (Isaac Hayes) has the President.   He takes Snake to meet with the Brain (Harry Dean Stanton) who is essentially the Duke's adviser, and who also has a map to where the mines are on the bridge.  Brain resides in the New York Public Library with Maggie, his main squeeze.

It turns out that Snake and the Brain were partners in crime, but Brain (whose real name is Harold) ditched Snake, so Snake has trust issues with him.  But Snake convinces Brain (at gunpoint) to take him where the President is being held.  Things backfire when the Duke discovers what is going on and captures Snake.  He forces Snake to go one-on-one against the biggest, baddest mofo in the prison (Ox Baker).  While Snake battles it out, Brain and Maggie rescue the President. 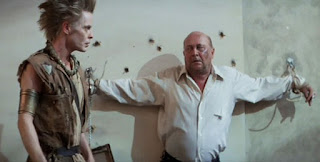 Eventually the four team up again with Cabbie and begin a race down the bridge trying to dodge the mines, and being chased relentlessly by the Duke.  The Duke's car is a sight to behold,   It has chandeliers hijacked from some fancy hotel as headlights and looks exactly like you'd think a 70's era African-American gang leader would have.


Not all of the heroes survive however.  But, of course, Snake does.  (Remember, it's hard to kill a snake.)  You'll have to watch the movie to see who else does. 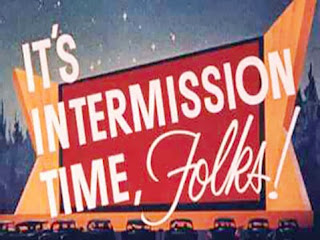 It's 16 years later from the time of Escape from New York, and, coincidentally, (or maybe not) the same amount of time since the first movie.  I don't know what the hell happened to the prison in New York.  For all I know it's still in existence.  But in the history since that time there has been a massive earthquake that completely separated the city of Los Angeles from the mainland.  The country is now being run by a radical right-winger (think Jerry Falwell on moral steroids), who, as President for Life (played with incredible intensity by Cliff Robertson), has declared L.A. to be a morally corrupt place.  It is here that all morally undesirable people are sent.

Not necessarily all within the confines are criminals by current standards of legality.  The "morally corrupt" inhabitants include those of non-conforming religions (Muslims and any non-Christian religions, as well as atheists), users of now illegal drugs such as tobacco and alcohol, fornicators, and anything else that the devout Christian President deems a "sin".  Of course, being in that atmosphere, most of the residents, at least the ones we encounter on screen, are morally corrupt even by today's standards, but they could be seen as victims.

The President's daughter, Utopia (A. J. Langer), confiscates a secret weapon from her father and escapes into L.A. where she ends up hooked up with the leader of a counter-revolutionary group inside the compound, Cuervo Jones (George Corraface).  The secret weapon, the MacGuffin of the story, is a device that can be used to control satellites orbiting the earth and with pinpoint accuracy effectively shut down an area, an entire country, or as stated in the movie the entire globe.  It does this by sending an electronic pulse that shuts down all electric powered paraphernalia within the focus of the satellites.


Snake, our hero, is sent in to recover the device.  The President gives him explicit instructions, however, to eliminate his renegade daughter.  Under the direction of Commander Malloy (Stacy Keach), Snake is outfitted with various weapons and gear reminiscent of the latest James Bond film (Q, is that you?).   Among this is a holographic projector which gives him an ability to make a holograph of himself for a  15 minute period.  The impetus to get Snake to do the job is he is given a cut on his hand by a passing person which injects him with the "Plutoxin 7" virus, which he is told will kill him in a very short time.  (Once again, Snake is forced to comply with the less than reputable legal forces to do their will)

Among the people that Snake encounters is an aging hippie surfer (played by Peter Fonda), a smarmy scam artist, Eddie (Steve Buscemi), and a former cohort from his adventure in Cleveland (prior to the movie), "Carjack", who has been transformed into a transsexual leader of a competing gang, Hershe (Pam Grier).  I really liked Hershe and despite the obvious accoutrements on her chest, I had to watch the end credits to see if he or she was played by a male or a female... Pam Grier pulls off an incredible performance for a movie of this caliber.


Much of the movie, as in it's predecessor, involves Snake trying to overcome delays in his quest, including a great scene in which he has to score 10 points on a basketball court against a countdown timer which will mean his execution if he doesn't score the points in time.  And of courso, Cuervo Jones has to have his own stylish ride.  The film is a little too dark for me to see, but it appears that there is a disco ball on the trunk.  What purpose it serves, I have no idea...

Snake eventually nabs the device, and, against his explicit instructions, takes the daughter back to the mainland.  The President, showing his completely nasty side, has the daughter taken to the electric chair and demands the device from Snake.  As his timer runs out, it is shown that he was lied to about the virus.  It was just a very intense flu, not a lethal toxin.   Snake still has an ace up his sleeve (this is Snake Plissken, after all). Remember the holographic projector he was given?  Well, he finally gets a chance to use it.  Nuff said.  You have to watch the movie to see how it all comes out. 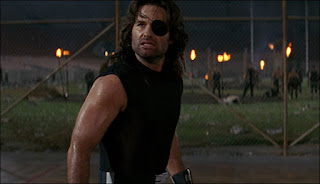 Well, the theater has just gone dark, so it's time to crank up the old Plymouth Fury and see if I can dodge the mines.  Drive safely kiddies.  BTW, are you curious about that Plymouth?  Here it is for you to enjoy. 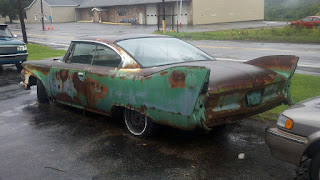 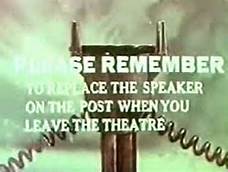