Chaos in the Courtroom 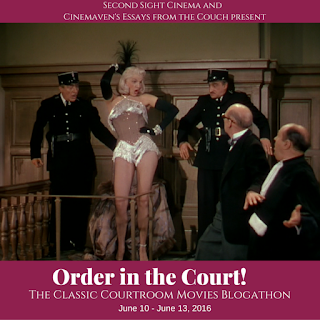 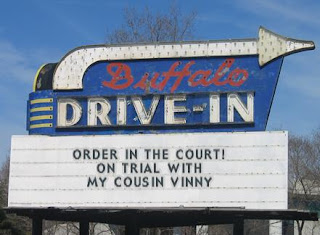 This is not your usual high drama murder court case.  Nor is this the Three Stooges.  But somewhere in between is this "fish out of water" comedy about a New Yorker in the agrarian South.  Instead of the clueless southern yokel in the big city (a la Ma and Pa Kettle), this fish out of water is reversed, with a pair of Brooklynites trying to cope with southern mores and attitudes in Alabama.  This is the one, BTW, that garnered Marisa Tomei her Academy Award (although people debate endlessly whether he performance was the most deserving that year).

Although the courtroom proceeding are the main focus of this movie, you can't miss the absolutely hilarious confrontations and encounters the two main characters have with the townspeople.  The clash of cultures is part of what makes the movie so endearing. 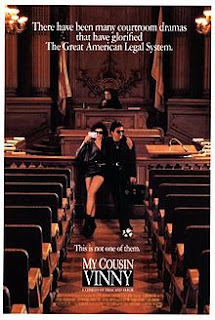 Bill Gambini (Ralph Macchio) and his friend Stan Rothenstein (Mitchell Whitfield), two New Yorkers,  are going to UCLA for school.  (Don't ask why two college students are going to LA from NY via Alabama, or it will warp your brain...  It's also best to not ask why Macchio keeps getting roles that are WAY younger than his actual age.  He was over 30, and yet he is a college student, probably only 18 or 19...)  They stop off at a convenience store, the Sac-O-Suds,  to buy a mound of groceries.  Bill, whose arms are full, puts a can of tuna in his pocket, and accidentally leaves without paying for it.

Sometime later, shortly after discovering the stolen can of tuna, the two are pulled over.  They think the problem is the shoplifted tuna, but they are arrested and accused of having robbed the Sac-O-Suds and shot the clerk.  But, unaware of these circumstances, both confess, thinking they are only confessing to a shoplifting charge.  The sheriff, Sheriff Farley (Bruce McGill; famous for playing D-Day in Animal House) is convinced that he has a confession to the murder and thus we have the setting for this comedy of miscommunication.

Bill and Stan, when they find out it is a murder charge call home and the folks send up Bill's cousin, Vinny (Joe Pesci), a lawyer, but one who has not yet had any trial experience, along with his fiancee, Mona Lisa Vito (Marisa Tomei).  The two show up in town, looking like aliens from another planet among the local yokels.  (BTW, Pesci is in actuality 20 years older than Tomei, but the camera manages to pull it off that they are close to the same age.)


From this point on, the "fish out of water" sequences take front and center of the scenes outside of the courtroom.  There are various scenes that just cause you to roll up in ball laughing hysterically.  At one point (off screen), Lisa tries to hustle a local in a game of pool, but the local stiffs her on the bet.  Vinny confronts the yokel and a fantastically funny argument ensues with Vinny using his lawyer's lingo and expertise to argue the case of whether they should get the money or Vinny should just beat the local up and then get the money.

Also a great source of humor is the various sleeping arrangements that the two have to make because they find themselves in hotels which are, variously, located next to a) a plant that sounds a loud whistle to call the workers to work, b) a pig farm, or c) a railroad track that blows its horn and rattles dishes off the nightstand.  Even if it is hard to believe that any of the hotels would be located in such inopportune locations, it is still funny to watch.

Vinny's main nemesis in the courtroom is Judge Chamberlain Haller (Fred Gwynne in his last role).  Judge Haller does not like Vinny's comportment or his oafish manner, and is constantly trying to find out who Vinny really his and what his courtroom experience really is.  Vinny, for his part, tries to keep ther judge at bay by pretending that he is somebody he is not.  On equal levels of humor are the various attempts by Vinny to conform to the judge's opinions on how to dress for his courtroom appearances.

On the opposite side of the courtroom is the defense attorney, Jim Trotter III (Lane Smith).  Trotter is not the hard ass that his job would seem to make him out to be, nor is he the Dan Fielding type (the smarmy DA from Night Court).  In fact, for the most part, he is a likable fellow, friendly and genial.  In fact everyone on the side of the law in this movie are not really out to get Bill and Stan: they are just every day people just going about their jobs in the search for justice.


At one point, Stan thinks Vinny is incompetent and decides to opt for the public defender.  This proves to be disastrous when it turns out that the man is nervous in front of people and has a st-st-stuttering problem.  The lawyer (Austin Pendleton) also proves to be less on the ball than Vinny actually turns out to be, so Stan fires him and goes back with Vinny.

The last 40 minutes of the movie include the scenes where Vinny, one by one, dismantles the prosecutors case by undoing each of the eyewitnesses testimonies.  The three eyewitnesses (played by Maury Chaykin, Pauiline Myers and Raynor Scheine) have holes in their testimony that Vinny proceeds to expose.

The really impressive ending in which Vinny has to call his fiancee to the stand for her expertise in automotive knowledge (trust me, you gotta watch to see this part) is one of the best parts of the movie.  You don't need a college degree in law to know how this turns out.  Of course Vinny gets his cousin and his friend off.  But the trip is really worth it.

This movie has been praised by lawyers all over for its accuracy and presentation.  According to Wikipedia, the director, Johnathan Lynn, has a law degree from Cambridge University, which, if true, shows how even in the midst of a comedy, how much of a feeling for accuracy in the courtroom proceedings the director had.

Well, that wraps up this show, kids.  Just a word of warning.  If you get pulled over by the police on the way home, ask questions... 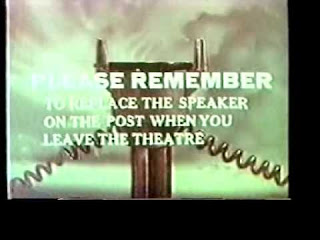