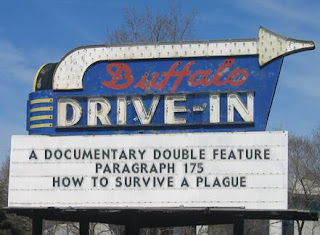 I'm not the kind of person to shy away from controversy.  And while I've kept this blog rather light-hearted over the past year or so, I have come across two rather riveting documentaries I felt obliged to share.  Both deal with the homosexual community, one as the subject of Nazi Germany's persecution of its homosexuals in the late 30's and 40's, the other a look at the AIDS epidemic and how people in the homosexual community fought to have the government address it with the issue and find medical solutions to the epidemic. 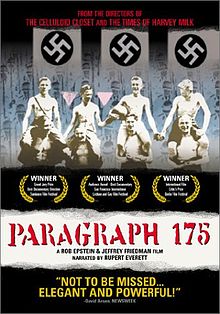 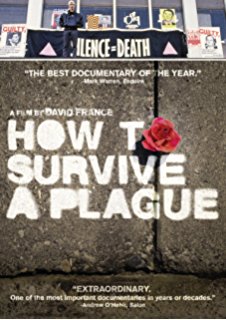 From the beginning of the film:

"An unnatural sex act committed between persons of the male sex or by humans with animals is punishable by imprisonment; the loss of civil rights may also be imposed.

Well, there it is in black and white.  As early as 1871 homosexuality was deemed a crime under German law.  But the same or similar codes existed throughout the world, in some form or another  (and still exist in some countries, to be sure).  You can even find history of some of the more liberal minded nations, including the United States and England having laws against "sodomy".   The Nazis being who they were and the essence of the theme of purity of the Aryan race, however,  caused the group to enact harsher penalties than any that the rest of the "civilized" world may have done, but it was not wholly limited to the Nazis.  The documentary follows Klaus Muller, a young man who interviews five surviving homosexuals and one lesbian, all who experienced the persecution of Nazis, as well as their life and experiences prior to the rise of the Nazis .  Rupert Everett was tagged to be the narrator of the film.

In the Weimer Republic, paragraph 175 was largely ignored, although crackdowns did occur.  In Berlin, the decadent lifestyle of post WWI, however, included allowing homosexuals to exist freely, for the most part. "Heinz F." (a psuedonym)  tells of a club in Berlin which allowed itself to be rented out a couple of times a week for dances for homosexuals.  Annette Eick, a lesbian tells of falling in love with a woman at one of these gatherings that reminded her of Marlene Dietrich.  This woman made it to England and sent Annette a passport that got her out of Berlin.

Pierre Seel, a Frenchman is somewhat reluctant to talk to Klaus because of his experiences.  He says he made a promise to himself at the time that he would never talk to or shake hands with a German. Albrecht Becker  had an older lover that he spent time with for 10 years during the Wemer Republic.  Gad Beck tells of an athletic trainer with whom he had an encounter.  All of the interviewees tell of how the years before the rise of the Nazis were almost idyllic.

Upon the rise of Hitler, however, that all changed.  It was not immediate however.  Even Hitler's right hand man, Ernst Rohm, the founder of the SAS, (the Stormtroopers) was gay.  Hitler himself condoned Rohm's sexuality, at first, claiming that since  the SA was "not an institution for moral education...but a formation of seasoned fighters...private life [could] not be an object of scrutiny", thus basically saying it didn't matter about Rohm's private affairs so long as he didn't conflict with the ideology of the Nazi party.

That changed almost immediately however, and with the so called "Night of the Long Knives" Rohm and many of his followers were executed and then it was open season on German homosexuals.   it had been preceded by the same treatment with Jews.  Many in the gay community thought they were safe however, because they considered themselves to be loyal Germans, but soon found out that didn't matter.

The film continues with interviews with the former concentration camp survivors, Heinz Dormer, Karl Gorath, as well as the previously referenced "Heinz F.", Pieere Seel, Albrecht Becker and Gad Beck.  Some of the film is rather heartbreaking, much as interviews with surviving Jews who were persecuted by the Nazis are.  Typically, according to the fim, it was the homosexual males who received most of the attention.  A passage of the narration states that the Nazis thought the lesbians could be rehabilitated.  Most of this prejudice stemmed from the fact that the Reich needed every available fertile female to increase the population of the Aryan nation, not because they actually had any plan to implement for the rehabilitation.

Paragraph 175 will make you think.  It is obviously not the film for family night (or maybe it is, if your children are old enough to understand what they are seeing).

The title of this movie (probably) gets its genesis from an outburst from Larry Kramer midways through the film, in which he addresses a group of AIDS Coalition to Unleash Power (ACT UP) activists:  "Plague! We are in the middle of a f***ing plague! 40 million infected people is a f***ing plague! "

The film covers the efforts of ACT UP to get the government and the drug companies to fulfill their obligations to find a cure for the disease of AIDS.  Most of the people involved in the actions were from the homosexual community, but they had several medical personnel who also worked to find the cure.  But they had some very serious opposition, especially in the person of Jesse Helms, a U.S. senator whose own view is on record that the homosexual community brought this epidemic on themselves through their own actions, including, but not necessarily solely, having bad safety measures during sexual intercourse.

The activists, which included men like Mark Harrington, Bob Rafsky and Jim Eigo formed a group to spur the drive to find a cure.  Because of the prevailing views of political representatives kept the drive stalled, and because the drug companies seeking a cure were hampered by rules and regulations that inhibited quick solutions, the activists had to take to protests at various locations to try to bring public awareness to the situation.

The film ends on a positive note as there was some success in using a variety of drugs that prolonged the lives of the victims of the disease.  Although some of the main figures did pass on from the disease before the success, we find several of the main figures (I assume) in present day still surviving the "plague".  The film will open your eyes and may even instill some faith in human nature.  I admit that I found some of the actions by the ACT UP group to be a little disturbing, but that is tempered by the fact that some of the politicians don't seem to be quite the sympathetic souls they should be.  (Jesse Helms, of course, but even Bill Clinton in archival footage doesn't come off all that sympathetic).

As a heterosexual male, I still got a lot from both of these films.  I recommend both, but as with the first one, they are not family-friendly films, so exercise caution if you want to watch them with children.
Posted by Quiggy at 2/12/2017 08:45:00 AM