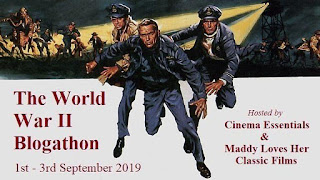 Five Came Back: A Story of Hollywood and The Second World War by Mark Harris: (2015)


I just love history books.  I also love reading about Hollywood and it's denizens.  Mark Harris has written an extremely intriguing book Five Came Back (2015) which chronicles the adventures of five Hollywood directors and their work in filming documentary film for the War Dept. during WWII.  I came across this book last year in the stacks of books at the library where my sister works when I was on Christmas vacation, and spent virtually every free hour devouring it.

I'm just guessing it must have sucked to be a gung-ho American patriot and be deemed too old to serve your country in the Armed Forces.  Many of Hollywood's elite men went off to fight the good fight, while older men like John Ford and Frank Capra had to basically watch from the sidelines with something like envy.

The five men whose work behind the lines chronicled here were all beyond the age of what was considered the upper scale for military service.  The young tyke, John Huston was 36, and possibly still eligible, but had been classed 4-F, while John Ford was virtually an old fogie at age 48.  Still these guys got to be used in support of the war effort, being drafted as officers and assigned to film the action (or in many cases to re-create the action) of the efforts of the military in the war effort. 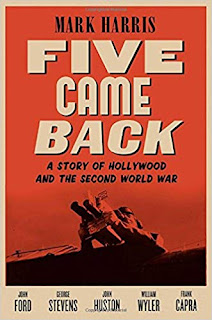 At the very start of the war, directors like Capra and Ford were busy with the details of just filming the average movie (and dealing with the brass which were involved in trying to insure the film industry as well as the country remained neutral in their depiction of the war).  That is until the events of Dec. 7, 1941, when the Japanese bombing of Pearl Harbor catapulted the United States into the war.

All of the directors made appeals to be included in the mix, although the really gung-ho Frank Capra had probably the most pressing interest in being considered patriotic.  He had emigrated to the US as a young boy, but he was still considered an outsider because of his foreign origin.  He thus felt he had to strive harder to prove his patriotism.

John Ford, on the other hand, was as patriotic as they come, although he comes off (at least in the telling of his trials and travails by the author) as a bit of a glory-seeker.  (I mean, it seems a little self-seeking to actual petition to be given a Purple Heart, whether you actually deserve it or not...)

Each of the directors is giving an equal amount of time in focus, but I found John Huston's story to be the most intriguing.  Perhaps because I find Huston's personality to be similar to my own.

Harris' writing makes for extremely entertaining reading.  He skips around, discussing each director in a linear fashion so you won't get bored just reading one long detail about one director at a time.

All of the films chronicled in he book are available for your perusal.  I recommend the "50 Movie Pack: War Classics" available from Mill Creek.  While the quality of each is not consistent, you do get all of the documentaries in one volume.  I already had the entire Capra output ("Why We Fight") on a separate collection, but it was worth buying for the rest of them.  Especially if you are interested in the history as experienced first hand.

If you find this book interesting enough, I highly recommend a Netflix series that was based on it. 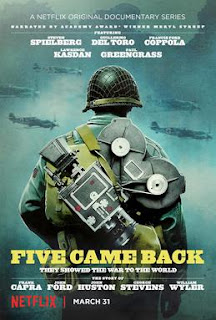