In the century + of cinematic history there are scenes which are memorable.  Some of them are so memorable that even people who haven't seen the entire film are familiar with the iconic scene, so much so that the mere mention of the movie will call up the scene.

King Kong:  The ape at the top of the Empire State building.

Gone With the Wind:  "Frankly, my dear, I don't give a damn.

North by Northwest: Cary Grant being chased by a plane.

Psycho:  The shower scene where Janet Leigh gets the knife.

And you can probably come up with dozens of others.

One that you may or may not be familiar with is the battle on the Odessa steps from Battleship Potemkin.  Although you may not be familiar with that scene in particular, however, you have seen it's influence, I'm sure.  The famous shootout from the Brian DePalma film The Untouchables was highly influenced by it.  So was the scenes at the end of The Godfather where one member of the five families gets executed on steps.  And countless parodies of the scene appear in movies across the span of cinematic history.

The Battleshp Potenmkin was Soviet director Sergei Eisenstein's homage to the 1905 mutiny on the Russian battleship Potemkin, one of the early predecessor's to the eventual Russian Revolution of 1917.  And although, by necessity, Eisenstein's story had to be truncated, it makes for an interesting segment of Russian history.  And if you are interested in a more in depth relating of the story, I highly recommend Neal Bascomb's Red Mutiny: Eleven Fateful Days on the Battleship Potemkin.

For one thing, if you only watch the movie, you could easily get the impression that the mutiny was spontaneous.  But there was a lot that led up to it, not just the maltreatment of sailors across the entire Russian navy.  When you know where people come from then you can better understand the motivations that drive them to where they are heading.

Battleship Potemkin is one of the greatest movies of all time according to many lists. In September 2012, Sight and Sound named it #11 of the best 100 movies of all time.  And in 1952 it was the best film of all time as named at the Brussels World's Fair.  That last fact is extremely impressive to me, at a time when the Cold War was heating up and Russia was looked on as a potential Evil Empire.

The time is early summer 1905.  The crew of the Battleship Potemkin are typical of any ship in the Russian Navy at the time.  Pressed into service they have to not only endure the hardships of life at sea, but they are treated poorly by their superiors.  Among others, a sailor named Vakulinchuk has had his fill of the ill treatment he receives at the hands of the officers like Commander Golikov and his second in command, Chief Officer Gilarovsky. 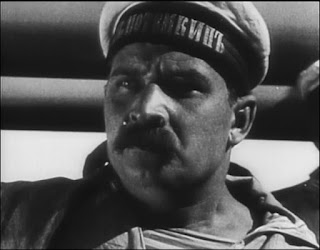 To top off all the insults received from the officers, the ship has taken on, as meat for the crew, a load of worm-infested stuff that shouldn't even be fed to a dog.  The crew complains, of course, but Comm. Golikov, with the help of the ship's surgeon, Smirnov, declares that the worms are just maggots (as if that's any better) and can be washed off before preparation of the crew's meal of borscht. 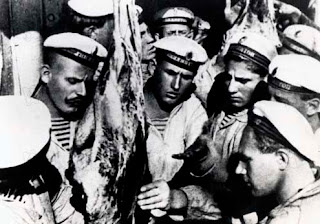 But the crew seems to have had enough, and refuses to eat the borscht.  Golikov and Gilarovsky are incensed.  After all, didn't they say the meat was edible?  Golikov takes action and demands a on-deck assembly of all the sailors.  Then he demands that those who will not eat the borscht step forward. 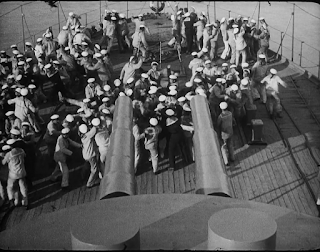 Those who do he deems are insubordinate and performs his own court-martial.  He declares the rebels guilty and summons the rifle squadron to execute them.  But Vakulinchuk convinces the soldiers not to fire on their comrades.  Thus begins the mutiny, and the sailors take over, executing the commanders and taking control of the ship.  In the ensuing melee, however, Vakulinchuk is killed. 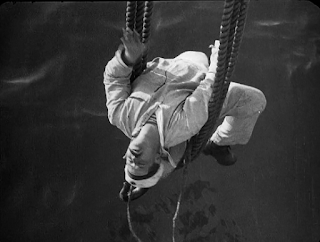 The sailors take the battleship to the port city of Odessa, where they plan to bury their hero, Vakulinchuk, with honors.  The citizens gather to see the body of their comrade, with a sign that declares he was killed "for a spoonful of borscht."

The citizens are whipped into a frenzy against the Tsar, and the city officials call out the city guard which advances upon the dissenters, mowing down anyone in their path.  This is the pivotal scene of the film and the one for which it is most famous; the battle on the Odessa Steps. 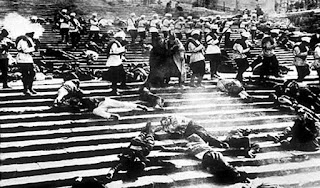 And in retaliation the sailors on board the battleship fire upon the city's opera house, where the military leadership is housed.

Ultimately, this being a paean to the first revolutionary actions that led to the deposing of the Tsar and creating the Communist Republic that eventually became Russia, the scene ends with the strains of victorious song and the success of the revolution.  Of course, any student of history knows it was not so immediate.  It would take yet another 12 years before the success of the Russian Revolution actually came to fruition.

What is not shown, the immediate aftermath of the mutiny, there was much dissension among those who had initially mutinied.  The battleships sent to disarm the mutineers and retake control of the Russian flagship had initially joined in the mutiny, but at least one of the ships decided to return to Russia and beg forgiveness.  Only the Potemkin sailed on to freedom, and even then, after the sailors were granted asylum, the battleship was eventually returned to Russian control.

But that shouldn't take anything away from the significance of the film as a piece of history, or from its significance in the pioneering of certain filming processes.  I don't consider it to be as great as its touted to be by critics, but it is a significant movie in the history of cinema, if only as a historical look at the early stages of the revolution.