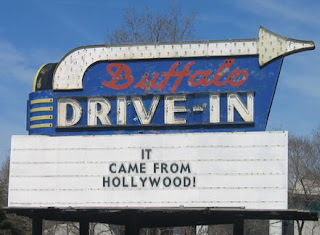 So you're probably asking  "What the Hell?  It Came From Hollywood???  How the Hell can that be a lost classic?"

Sometime in 1982, the duo of Malcolm Leo and Andrew Solt, the pair that gave us "This is Elvis!" among others, collected clips of various cheesy B-movies and pieced them together and got the likes of Aykroyd, Candy et.al. to introduce segments on such subjects as "Aliens" "Brains" and of course a tribute to Edward D. Wood, Jr.

This is Mystery Science Theater 3000 on attention deficit disorder.  Instead of one complete movie, you get bits and pieces of some of the most unintentionally hilarious scenes from some of the cheesiest pictures ever made. Plus you get the running commentary of the host of the segment. This movie is the one that inspired my interest in cheesy sci-fi and drive-in movies.

So why do I call it a "lost" classic?  Because it has never been released on DVD, that's why.  If you are lucky you might be able to scrounge up a worn out VHS copy of it.  Or if you have access to the right tools on your pc or tablet you can watch it on youtube.

The fact that this gem has never been released to DVD, yet such clunkers as the 1973 musical remake of Lost Horizon has is a mystery.  For more insight on why I picked that particular movie head over to Angelman's Place and read his take on Lost Horizon.

It Came From Hollywood cannot really be encapsulated as I have done with other movies.  It's one that has to be seen to be appreciated.  The list of credits at the end is like a blog list of future entries to this blog, some of which I already have, but some I will have to keep a weather eye out for at my local video place.  Not just a few of them are most people's lists of the worst movies of all time.  (Did I mention they have a tribute to Ed Wood segment?)

In case any of this intrigues you, I have added a link to a youtube page that has the entire film which I hope works....


So long from the back seat, folks.