The Dickens, You Say!

Note:  This post marks a landmark in my blog.  It is the first movie I have reviewed that is still in the theaters as of the time of the writing.  A special thanks to Hamlette of Hamelette's Soliloquy for giving me the notice that it was even in theaters.  I don't own a TV, so I had no idea it was out.  But after seeing the trailer, and reading one negative review by some twit in England (which only increased my determination to see it), I went to a theater yesterday to see it.


I have mentioned now twice on this blog that my favorite Christmas story is A Christmas Carol, a story by Charles Dickens.  The story came out almost 175 years ago and was a phenomenal success for the author.

What this movie (and the book it was based on by Les Standiford) brings to light is that Dickens, after the success of Oliver Twist, which had made him a household name and brought him great recognition, was suffering from a spate of less than stellar follow-up success.  Both Martin Chuzzlewit and Barnaby Rudge had been critical and financial failures.  His publishers were considering dismissing him. 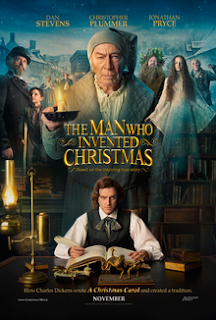 The movie starts out in 1842 with Charles Dickens (Dan Stevens) on tour bin the United States, being celebrated in ways that harken some film stars being feted, given standing ovations and applause as a celebrity of the day.  But 16 months later, Dickens' success has waned.  The last three books he has written were not very well received and were financial failures.  So his publishers are about to dismiss him.

Dickens makes a promise to bring out a new story in time for Christmas.  The only problem is he is suffering from a severe case of writer's block.  He just can't come up with an idea.  But while walking around London with his confidante,/agent he encounters several things which spark his creative juices, including a funeral for a rich man who has no mourners.

Dickens finally comes up with the perfect name for his character, Scrooge (Christopher Plummer) , and like many authors claim, actually has conversations with Scrooge to get his identity down.  Scrooge actually shows up (more or less in the flesh, to give him insights into the character.  But Dickens has other problems that threaten to derail his writing.

For one thing he has trouble convincing his staff to leave him alone when he is in the midst of his writing.  One young maid, Tara (Anna Murphy) is a constant source of interruption, but as it turns out is a reliable sounding board for his story, too.  But Dickens also has his father to deal with. John Dickens (Jonathan Pryce) is a big fat pain in the butt to say the least.  And of course, Dickens never really forgave him for deserting him as a child.  (Well, he didn't REALLY desert Charles; he was arrested and sent to debtor's prison, resulting in Charles having to go to work in a boot blacking factory.  And this is a demon that haunts Charles even to the present day.)

The story plays itself out with lots of neat little a-ha moments if you are familiar with the story.  I'm not entirely sure whether the movie is factual or just anecdotal.  It's probably a foregone conclusion that Dickens didn't actually see and talk to a physical manifestation of Scrooge, but other than that I can't say for sure if this is how it all panned out.  It is factual that Dickens barely finished A Christmas Carol in time for it to be sold for Christmas of 1843, and it is true that it was a success and probably saved his career, but as far as the rest, well, who cares?  It's good entertainment even it turns out to be hooey.

However, much as the distributors seem to want to market this movie as a family movie  (at least three of the coming attractions were cartoon movies...), I'm not entirely sure this is as much a "kid movie" as it is "an adult who is a kid at heart movie".   That's not to say I didn't thoroughly enjoy it, but as I've pointed out before, I am no longer a kid...  But if you are even slightly enamored of the original story, I think you will get some enjoyment out of this one.