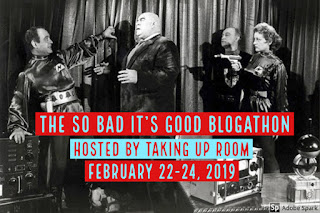 This is my second entry in the So Bad, It's Good Blogathon hosted by Taking Up Room 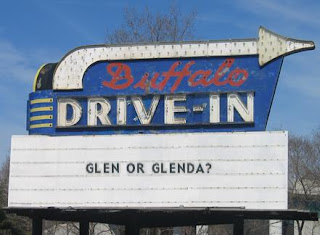 Note:  Way back at the beginning I inaugurated this blog with a tribute to Ed Wood.  If you have been reading ever since, maybe you've had time to get over that harrowing experience, so it's time to throw another Wood tribute at you.


Ed Wood, Jr. had a symbiotic relationship with Bela Lugosi.  Both needed something from the other, and although the relationship was friendly, both tended to use the other to achieve a personal goal.  As depicted in the Tim Burton loving biopic Ed Wood, Lugosi had fallen on hard times.  He was a morphine addict and could not get work in Hollywood, his metier of classic horror having fallen out of fashion.  Wood was a struggling wanna-be director, but he was not getting much success at getting jobs in his chosen profession.  When the two met it was a match made in heaven (or that oither place depending on how you feel about Wood, or Lugosi for that matter...)

In 1953, the two met and Wood saw his chance.  He had recently approached George Weiss, a purveyor of low-budget sleaze to direct a potential film about the life of Christine Jorgensen.  Jorgensen had had a sex-change operation that transformed her from a man, George Jorgensen, into Christine.  Plans for the movie about Jorgensen fell through when she threatened to sue if it was done.  Undeterred, Weiss hired Wood to write and direct a movie, already titled I Changed my Sex, just without any references to Jorgensen.

Instead, Wood decided to make his own story, about transvestitism (men who wear women's clothing).  Since Wood himself was an aficionado of doing the same, this turned the film into a more personal story.    He cast himself as the star of the film, under the credit of "Daniel Davis", and cast his new-found friend Lugosi as a guide through the film, a somewhat bizarre combination of mad scientist and god.

Because Weiss wanted a sex-change movie, and what Wood had originally created was just a film about transvestites, Wood added a second part to the movie which covered the story of a man who actually does have an operation, but the main focus of the movie was Wood's personal plea for compassion for those who are somewhat different from the norm.  It should be noted that the film is a victim of it's own time and ethos.  At the time a man dressing as a woman could get him arrested.  Whatever your view is about the transvestite is today, society has relaxed somewhat on their view of the phenomenon.  It is no longer illegal to dress up as a member of the opposite sex, and only one's personal view of the situation has any impact at all.

The message of acceptance is there, but because Wood was a rather inept, if not enthusiastic, director, the message is sometimes lost. Wood's ability to find ways to use stock footage from the vaults to somehow emphasize his story is one of the things that can both enhance and detract from the intended message.  (A rampaging horde of buffalo?  Omly Wood himself knows what that means...) 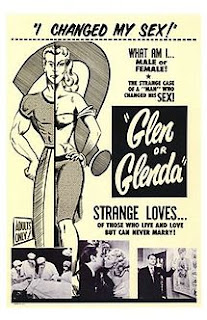 
In the making of this film, which deals with a strange and curious subject, no punches have been pulled-- no easy way out has been taken. Many of the smaller parts are portrayed by persons who actually are, in real life, the character they portray on the screen. This is a picture of stark realism-- taking no sides -- but giving you the facts -- ALL the facts -- as they are today... YOU ARE SOCIETY -- JUDGE YE NOT...

The movie opens on the God/Scientist (Bela Lugosi) informing the audience that sometimes things are not always what they seem to be.  Or maybe he's just being cryptic.  You decide.


The opening is on a man dressed as a woman who lies dead, having committed suicide.  It turns that that he committed suicide because, try as he might, he couldn't resist the temptation to dress in women's clothes, despite the public outcry that such a behavior was abnormal.  (Remember, I said earlier at this time it could get you arrested if you did such things that were not considered fit for "normal" people to do.)  A police captain, Inspector warren (Lyle Talbot) approaches Dr. Alton (Timothy Farrell) to try to get some information on why any one would want to be in such an abnormal mental state. 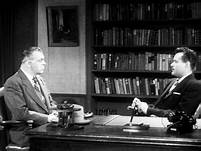 Dr. Alton tells the inspector he has two cases in which he can illustrate the phenomena better for him.  The story of Glen (Edward D. Wood, Jr. under the screen name "Daniel Davis") constitutes most of the film. 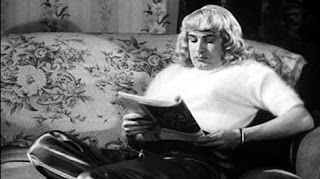 Dr. Alton takes pains to establish that Glen is not a homosexual.  He is just a guy that derives pleasure from the feel of women's clothing on his body.  Some of this, it seems, may be attributed to a rather bizarre upbringing.  His mother wanted a daughter instead of a son, and there is some indication that Glen's father was rather in his attitude toward his son.  (Much like Wood's own childhood, if his background story is to be believed).  When Glen was a young boy he wanted to dress up as his sister for Halloween, but it didn't stop there. 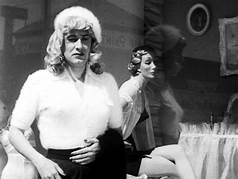 Now Glen is in his thirties and on the verge of marrying his sweetheart, Barbara (Delores Fuller, who was actually Wood's significant other at the time).  Barbara doesn't know of Glen's predilection for wearing women's clothes, and Glen fears that he must actually tell her before she discovers the awful truth for herself.  He debates on whether or not to tell her before the marriage and risk having the plans for marriage come crashing down, or if he should wait until after the marriage, and thus risk alienating his new bride.  (In the parlance of the time, it's either damned if you do or damned if you don't.  There doesn't appear to be a third option where she accepts him for who he is.)

The Scientist appears again, heralding a segment of the movie in which Glen is haunted by all sorts of bizarre fetish inspired dreams.


The dream sequence seems to have been added only to titillate the viewer, although it could easily be the inspired haunting of Glen wrestling with himself over his dilemma.   Eventually Glen does decide to come clean with Barbara.   Since this is a parable of Wood's own worries about his own transvestite tendencies and not a morality play, of course she accepts his predilection, although as she says, "Maybe we can work this out". 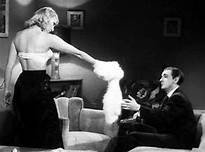 Since the movie was supposed to be about sex change, there is an additional sequence tacked on about Adam/Anne ("Tommy" Haynes).  Adam's story also somewhat parallels Wood's own story in that he, too. wore women's underwear while fighting in WWII, with the exception that when Adam gets out of the service he does have a sex-change operation and becomes Anne.